Goshen College students and community members sorted trash, ate together, drummed, and marched to the Goshen courthouse despite wind and rain to show their support of international climate action last Saturday. Goshen was one of 5,245 places in 181 countries across the world that helped spread the message on Oct. 24th:  350 is the limit of carbon dioxide in parts per million that is safe in our atmosphere.

GC began the day with a trash audit behind the physical plant. In three days, the college produced approximately 32 cubic yards of trash, which was sorted by hand. After opening up the bags of trash, roughly one fourth of the trash was recycled.

Glenn Gilbert, utilities manager, said approximately 400 water bottles were thrown away in just three days, all of which could have been recycled.

“We go to great lengths to avoid thinking about how much we throw away,” said Gilbert.

A community potluck and drum circle at noon was well attended. The lunch potluck was a collaboration of student cooking, donations from the farmer’s market, and AVI Fresh, which provided the equivalent of 35 meals from students who donated a meal toward the cause.

“We had just enough food, and it was all really tasty,” said Alana Kenagy, a junior who helped organize the event. Student organizers used biodegradable paper products, which resulted in just one bag of trash at the end of the day.

“The food waste and paper products from the meal are currently being eaten up by worms in [systems operation technician] Steve Shantz’s compost,” said Corinne Jager, a first-year involved with planning the meal.

Dave Ostergren, director of graduate program in environmental education, addressed the crowd as people ate and wrote letters to state senators and representatives.

Ostergren challenged people to do things he deemed “impossible:” he urged people to find someone over the age of 45 who has never written to a politician, and get them to write a letter saying “We need to do whatever it takes to reduce our carbon footprint.”

After raffling off a bike, light bulbs, cookbooks and other items to those who had either written or called a state legislator, students and community members traveled by bike and on foot to the courthouse and ended the day with a rally.

“The atmosphere of leaves flying in the air, voices raised in appreciation for the earth, and banners and posters demanding a new era…was exciting,” said Hannah Eberly, a first-year involved with planning the event.

Community member Wilma Harder was waiting for the bikers and marchers at the courthouse and provided acoustic music while people huddled together and swayed to the rhythm.

Tori Yoder, a junior, read a statement from Mayor Allan Kauffman, who couldn’t attend the event.

“While there are vastly different schools of thought about the significance of global warming, there is little doubt in my mind that it is a clear and present danger,” said Kauffman. “It is becoming more critical with each passing day that we who occupy this Earth become better stewards of our atmosphere.”

Wendell Wiebe-Powell (I looked up his title and he’s a member of the Sustainable Business Network and the Michiana Organic Growers Association and also Executive director at ASSETS in Elkhart county, whatever that means) also addressed the crowd, highlighting that while day to day actions and choices are important, getting the government to act is crucial.

“We’ve got to take legislative action, even though people say politics is ‘dirty business.’” said Wiebe-Powell.

Later that evening, GC students and community members gathered again in Newcomer Center for a coffeehouse featuring music, poetry and readings with an environmental justice theme.

Throughout the day, around 200 people participated in the Oct. 24 events.

“[350] was only a success because everyone behind it believes so fervently in its purpose,” said Corinne Jager, a first-year involved with planning the day’s events. “In my opinion it’s the most global and biggest social issue there is.”

More information concerning October 24th as well as the compilation of 350 photos from around the world is available at: http://www.350.org/. 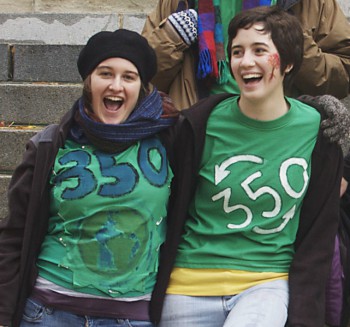 Students made custom T-shirts, ate communally and made a huge "350" out of garbage on the 350.org climate change action day. Photo by David Zwier.